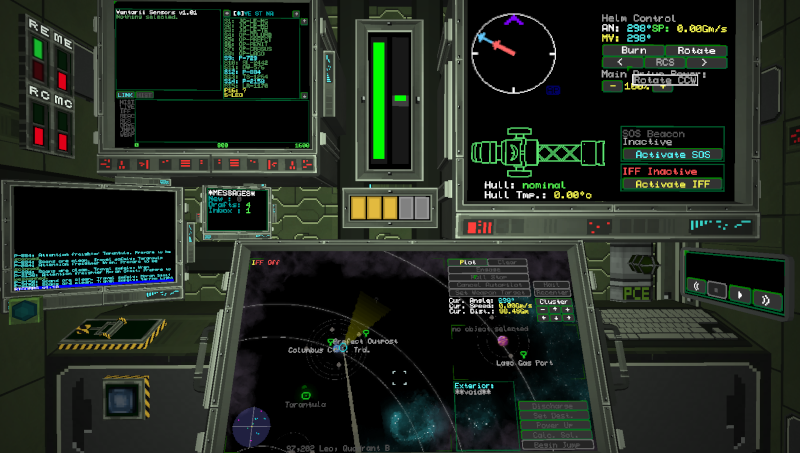 The game itself is currently in closed beta, but will soon become early access on STEAM (approx. end of June). I have the honor to test the game in the current beta state and play a little with the hardware interface. Because the game is not released yet, there is not much information on how to do that. There is an article and a protocol specification, but both are outdated and some critical information is misleading or is missing completely. So I will explain the minimal approach to create a little hardware device which will show the status for the main engine.

To activate the serial interface, an additional config setting is neede. Open the objectsinspace.cfg file and add the following:

The first option activates the serial console, the second skips COM1 and COM2 if your PC uses these ports as hardware ports.

After you start the game and open up a savegame, the game will try to open up a serial connection over a serial port. This serial port can be opened up by a microcontroller connected to a PC. Small development boards like an Arduino include a serial to USB chip to access the microcontroller from within the Arduino IDE (flash firmware, receive debug output, ...). This way, the game communicates with the hardware.

To start communicate with the game, the hardware device first need to fulfill a handshake. After that, the hardware specify what information is needed and what actions the hardware can offer. After that configuration, the hardware can switch to active mode and start reading events from the serial stream (the engine is burning, the ship is docked, ...) and send actions to it (start engine, undock ship, fire, ...). This information can be used to control the actual hardware (turn on LEDs, show numbers on displays, spin a fan, ...)

To build the firmware, we just need to implement the steps above. First, we open the serial connection on 9600 baud. After that, we do the handshake. If this is successful, we configure one event and switch to active mode. In the main loop we read a string from serial and process the received message. If we get an 1=1, we switch on a LED, otherwise, we turn it off.

Connect your Arduino to your PC and use the Arduino IDE to flash the code into the microcontroller. After that, the onboard LED will light up when the main engine is burning.

Sure, this is just a minimal example. To get this working reliably, there is some additional work to do like handling broken messages or lost connections. But you can get an idea how this is supposed to work. If you need more pins than the Arduino can offer, you can use a cheap shift register like the SNx4HC595 to attach even more stuff. For a cheap alternative to the Arduino, you can also use an ESP8266.